The traditional owners of Parramatta, the Dharug People, invite you, your family and friends to join them in their NAIDOC Week celebrations. Everyone is invited to this free event featuring kid's amusements, live entertainment, free workshops and bush food and bush medicine displays! 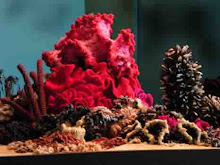 The Sydney Hyperbolic Crochet Coral Reef - In the interest of contributing to the world wide phenomenon initiated by The Institute For Figuring, In Stitches Collective is facilitating the creation of a Sydney Coral Reef. We invite you to participate in this woolly celebration of the intersection of higher geometry and craft, a testimony to the disappearing wonders of the marine world.

The reef was inspired by geometric models of hyperbolic space, originally developed by mathematician Dr Daina Taimina in 1997, using the art of crochet. Until that time most mathematicians had believed it was impossible to construct physical models of hyperbolic forms, yet nature had been doing just that for hundreds of millions of years. It turns out that many marine organisms embody hyperbolic geometry, among them kelps, corals, sponges and nudibranchs. The IFF reef not only looks like an actual coral reef, it draws on the same underlying geometry endemic in the oceanic realm.

The Tract House is a "spread-the-word" project that debuted at the Contemporary Museum in Baltimore on May 31, 2008. The Tract House tracts were written by friends, neighbors, acquaintances, visitors to this website, and friends of friends. While most popular tracts are religious, The Tract House tracts can be nearly anything‚Äî manifestos, diatribes, stories, rants, poems, or lyrics. They can be about whatever the writer finds pressing, whether it be something personal, professional, political, domestic, local, or global. Gallery visitors are encouraged to peruse the many tracts and take home what they wish. Visitors of this website are encouraged to print the tracts on their home printers. It is hoped that the tracts will educate, activate, infuriate, obfuscate, titillate, inspire, upset, and irritate. The tracts can be treasured or passed on, crumpled in disgust or venerated, folded up and put through the laundry, or left on a car windshield. visit http://thetracthouse.com for more details

Hi there, I'd like to invite you to our exciting new social network at
Craft Spider (http://craft.craftspider.com)!!

We plan on building this network up rapidly to be a fantastic and fun
place to meet other crafters and to communicate with new and existing
customers!

Not only can you now build a detailed profile for your organisation, but
also join and start user groups on any topic you wish! We also have
forums, and the ability to upload and share as many photos as you want
about your work, or perhaps just items that inspire you!

We also have free classifieds so you can buy and sell treasures! You
also get a blog.. plus we have a global calendar where you can promote
events to everyone such as classes, your next sale or trade fair!

You can choose to make your groups public or private (by invitation
only), so its a great fun way to communicate with customers too. Also as
people sign up you can make new friends and invite them to your groups.

Etsy.com is a community driven online store that people making handmade goods can sell their products - their motto is "Your place to buy and sell all things handmade". there's a zine called Storque, and you can read about some of the success stories highlighting successful Etsy storeholders. some storeholders have been able to give up their day jobs to sell their works fulltime via Etsy, whilst others are part-time sellers.

Customers can browse by colours and find something to buy that matches that colour. or they can search one of the 105000 stores for one in their local area should they wish to buy local. there are a couple of Time Machines where customers can browse recently and past listed random items, ordered by posting time. Etsy also supports the buy handmade challenge for the holiday season.

"Guerrilla knitting" has a couple of meanings in the knitting community - to some, it merely means knitting in public, while to others, it means creating public art by knitted means.

Rose White from yarnivore spoke at The History of Guerilla Knitting session at the 24th Chaos Communication Congress in 2007 in Berlin on day 3 - 29/12/2007. a torrent video can be downloaded of the session. (open the video in VLC if you don't have another video player that can play the .mkv video file). The Chaos Communication Congress is organised by the Chaos Computer Club, Europe's largest hacker group, founded in 1981.

Rose gave a brief history of knitting, and some of the myths held over the years about the foundations and age of knitting. She compares knitting with computer hacking referring to proprietary knowledge, pattern making, knitting guilds. Also about the commercialisation and control of patterns prior to 1960s and subsequently by Knitting pattern books and yarn companies who controlled the market

Elizabeth Zimmermann who in the 1960s generated generic pattern books which broke out of the usual mold of patterns requiring a yarn makers yarn to make the pattern correctly. Effectively she made knitting open source again! She had a TV show in the USA which brought her style of knitting to the public, and she ran knitting camps to teach others.

Rose also mentioned KnitML, the knitting XML code specification which is being introduced to standardise knitting patterns and terminology.

"The KnitML Project's main goal is to develop and promote adoption of a standard content model for knitting patterns. By developing a community-supported specification (KnitML) and providing basic rendering and transformation tools, the KnitML Project aims to make KnitML easy to use and valuable to the knitter."

Questions were raised also about knitting (patterns) and Creative Commons licencing. many patterns are not available to be used as they are still covered by US copyright so are still unavailable to the public.

Rose talks about giving back the creative power to the knitter - to allow them to modify the patterns, or not make the project exactly as per the pattern. even changing the colours used in an accompanying photo of a finished pattern is a stretch for some knitters!

Rose says, "over the past 30 years or so, there have been different individuals who have contributed to this geekier, more hands on approach to knitting - wresting it out of the control of commercial enterprises. this leads us to guerilla knitting in the end."

Barbara Walker - Rose referred to her as "a knitting engineer". "she wrote 4 books of stitch patterns, where she knitted swatches, and dissected them and included written instructions on how to knit them - stitch by stitch. and she also developed a charting system, so that next to the swatch there would be a grid showing you how to do it in pictures, so that, you didn't even have to speak her language to do it. so that many of these knitting patterns were available, not just to English speakers, but to anyone who could pick them up and look at them. so this enormous dissemination of knowledge occurred when she started doing that."

also featured was Dave Cole and his knitted lead teddy bears and giant outdoor knitting using cranes and telephone poles as knitting needles to knit the American Flag at the Massachusetts Museum of Contemporary Art.

also mentioned was the new Ravelry site - a social networking site for crafters, knitters and fibre artists, where they can "Organize projects, stash, needles, and more" & "Show off your work. Share your ideas and techniques." & "discover. Find new designs & yarns. Make friends. Try new things." the site is only open in beta stages at the moment. aso of today, they send out 500 - 800 invitations daily and there are currently 6,193 people waiting for their invites, so the site is in demand!

knitting patterns have a certain mathematical quality to them. knitting is basically a binary system - knit & purl stitches. so it's possible to knit binary sequences, letters eg convert the letters to ascii hex, then binary - some people knit their names as signatures in their work.

so I'm keeping a list of some patterns and urls for sites on logical / mathematical knitting.

there's also the crocheting - such as the hyperbolic plane crocheted recently by Daina Taimina as a way to describe it physically. I need to practice crocheting though, so will stick to knitting for a while Craftster is a forum for people who love to make things but who are not inspired by cross-stitched home sweet home plaques and wooden boxes with ducks in bonnets painted on... If you've been known to run with scissors, you can break the rules of crafting with your fellow rebel DIY'ers there!